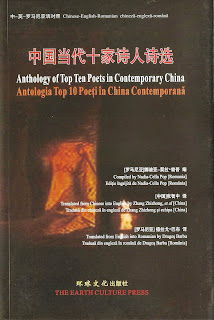 I have recently received from my friends in Romania, Nadia-Cella Pop and Dragos Barbu, this trilingual anthology of the top ten poets in contemporary China, published by The Earth Culture Press. This 130 page book has a Preface written by Romanian poetess Nadia-Cella Pop (also the book's compiler), entitled "Originality and lyrical creativity in the transition of feeling". The translation from Chinese to English is by Zhang Zhizhong (China) and other translators, and the translation from English to Romanian is by Dragos Barbu himself.

The ten Chinese poets in question are Yang Lian (born 1955, Bern, Switzerland, but grew up in Beijing), Aerdingfu Yiren (1962, born in the Qinghai Province), Zhu Likun (1964, born in Xiangtan County in the Human Province), Diablo (1965, real name Zhang Zhi, born in Fenghuang Town in the Sichuan Province), Ma Ke (1966, lives in Ningbo, in the Zhejiang Province), Xu Jiang (1967, born in Tianjin), A Mao (1967, the only poetess in this anthology, a professional writer of Wuhan Municipal Literary Federation), Zhao Siyun (1967, born in Yuncheng County of the Shandong Province) , Wu Tou-wen (1968, born in Chenzhou, Hunan Province) and Di Bai (1971, born in Anqing City, Anhui Province) .

What does Nadia-Cella Pop write about the ten Chinese poets?

YANG LIAN - in his poetry the reader finds "the reach to the stars, colours, questions and answers or the extinction of the beloved beings and landscapes."

AERDINGFU YIREN - "The poet's self-identification with the nature's miscellaneous images, dialogue to the being he loves, placed in an area of questions that have a shining halo leave the impression of a very fine beholder who possesses the accuracy of a sharp eye."

ZHU LIKUN - "Using comparisons and usual mementos [...] makes the branches of family tree cluster and the end of this resides in a sad song, an elegy of parting that leaves the scars of deep wounds behind."

DIABLO (ZHANG ZHI) - "Fine perceptions, innocence, passions, empathy, remorses that became lyrics marking life elements, all these lead to the first colour of the rainbow's spectrum, to the heart and blood's colour, crimson and red together."

MA KE - he gives time "a peculiar resonance, not only by its passing but its shape, light and strength. He looks to the time as to a gothic architecture, wherein people and consciences must live on the same side of their feelings. It's a metaphor with a living memory."

XU JIANG - Expresses his ideas in a brief or epic form. He "has the visual and acoustic 'sensors' for the sombre side of life" and "The poet regrets the decline of many things".

A MAO - Answers the question "how to reach the ' age of electronics' starting from the original mankind's genesis". She treats her femininity and feminine problems often from the physiology and philosophy perspective.

ZHAO SIYUN - "transposes in poetry the elements of a weird reality, speaking especially about moral matters.

WU-TOU-WEN - "Reading his poems we can feel the incumbent seclusion that approaches a sadness of mind (real or fictional).

DI BAI - He is "the poet who discovered the charm of the Sun rising over Yellow River. As the witness of a miracle, the poet spurs his sweetheart". He invites the reader to smile again after "passing the storm".

Poetry helps different countries with different cultures come together. Thanks to this Anthology of Top Ten Poets in Contemporary China (a Chinese-Romanian project) China is once again sharing part of its marvelous cultural heritage with the rest of the world. The book invites us readers to familiarize ourselves with this big country that has had strong relations with the Western world since old ages.

A big thanks goes to all the translators, including Zhang Zhizhong (born 1966, Boai County of Henan Province), and Dragos Barbu (born 1974), who has translated the works of various modern poets from Greece, Serbia, the United States, Mongolia, China, Brazil, Italy, Australia, Malta and Romania.

The compiler, Nadia-Cella Pop,  is a famous Romanian poetess, born in Ariusd, 1948. She is a Master of Arts in Philosophy (Babes-Bolyai University), and her poems were published in 70 titles of poetry journals all over the world (including VERSI of the Maltese Poetry Association). She has edited 35 anthologies and her poems were translated in 20 languages, including Maltese. She is author of 5 poetry books: GANDURI DE VEGHE (1997), DIN SIMFONIA VIETII (2001), AVALANCHE OVER IMPOSSIBLE (2006), THE LORDSHIP OF THE WORLD (2007) and SHIPWRECKS DELAYED (2010).

Posted by Patrick J Sammut at 10:35 PM No comments: 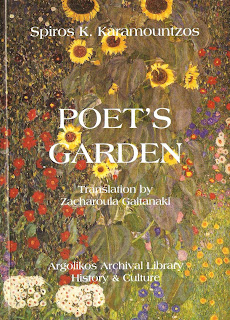 Keeping a blog like this has its advantages and satisfactions. It keeps me linked to many of my writer and poet friends not only in Malta but also abroad. I keep in touch with poets from Italy, Romania, Greece, India and Bosnia-Herzegovina, to mention some of them.

Zacharoula Gaitanaki has translated Karamountzos's poems from Greek to English and Dr. Jasvinder Singh and Dr. Shujaat Hussain (both from India) have written two critical studies, "Succinct and thought provoking poems" and  "Love Blooms in Poet's Garden of Spiros Karamountzos", respectively. Zacharoula has also written the Preface entitled, "When poetry becomes a beautiful garden open to all the people.."

Zacharoula writes that Karamountzos's poetry "is pervaded by love for the nature, people and life." She also mentions the "harmony of colours in nature" that calms us, "a wealth of words, feelings, memories and pictures [that] gains our estimation." As regards to Karamountzos's concise style Zacharoula writes: "The poet has enclosed in a few or more verses, all 'the light of words', a heartbeat, the blossoming of hope, love's words, the morning dewdrops, a double joy, an intellectual inquiry, a smile, the past and the present..."

Dr. Jasvinder Singh writes so: "Mr. Spiros K. Karamountzos has put in all concerted efforts to endear himself through messages in his poetry on love - its nuances and its different vibes to enchant life and the very purpose of existence in this mortal world." Later on he writes that, "in these poems the poet has remarkably visualized his precision about love, beauty and universal troth in life to opportune the reader to admire the poet with an extraordinary veneration and love for him."

Dr. Shujaat Hussain writes that POET'S GARDEN "reflects flow of Spiros thoughts knitted with the element of love, raises voice against cage and prison; a kind of feeling that turns into light wrapped into the rays of love and spreads its strong wing on the pages and attains eternity." Hussain reconfirms that Karamountzos's poetry - as does real poetry in general - "provides heavenly delight and comfort, cozy warmth to souls, soothes the minds and a medium to relieve the hearts from all sort of qualms." Hussain describes Karamountzos's style as sweet and simple, perfect, honest and without disguise.

Spiros K. Karamountzos was born in Karya, a village in Argolida. He taught as an elementary teacher but today is retired. Some of his books are: WORDS OF KARYA with memories of his village; KNOWLEDGE LEND WINGS TO INSPIRATION (2011), where the poet is interviewed by Zacharouls Gaitanaki; and the poetry collections HALCYONS (2000), STROKES OF THE BOW (2004), DEWDROPS (2006), SHEDDING OF LEAVES (2006), SUNFLOWERS (2010) and LOOKING FOR A POET (2013).

Now, that you planted on the earth
seeds with your name,
Poet, what else do you want?
Reflect on the harvest time.
***

Gypsy heart,
when you are in love,
you live and in a gypsies' tent.
***

Unchangeable
in saltiness of the open sea,
you will live for ever.
***

The stallion of poetry
gallops in the mind.
Unbridled.

Posted by Patrick J Sammut at 8:49 PM No comments:


emarjos@hotmail.com
Posted by Patrick J Sammut at 7:23 PM No comments: 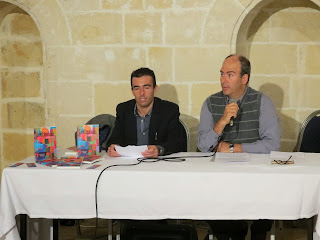 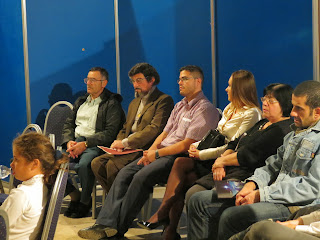 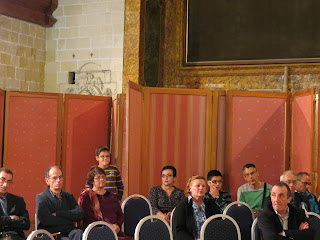 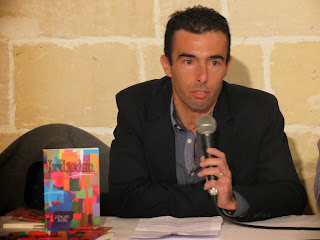