Raymond Grech was born in Sliema, Malta in 1953. He was educated at St. Catherine High School, Stella Maris College and at Sir Temi Zammit Sec. Tech. School. He started writing poetry at an early age and writes both in Maltese and English.
For the last fifteen years he has been managing his own firm. Raymond is a Lecturer of computer related subjects. He specializes and consults in Computerized Accounting and Business Administration. He studies the Holy Scriptures, Theology, Psychology and Philosophy.
Raymond Grech is an active member of the Maltese Poets Association and the Maltese Literary Society. He is a producer and presenter of radiophonic literary programs.
The poems of Raymond Grech are published in various anthologies, newsletters and newspapers locally and abroad as well as being aired on radio programs. More of his poems in Maltese and English can be viewed on his site, http://www.freewebs.com/raygrech
He is married with three sons.

Following are highlights of his poetry awards:

(The December 26 disaster in the Indian Ocean nations, when a massive earthquake triggered tsunamis that devastated coastal areas of Indonesia, Sri Lanka, India and Thailand and killed people as far away as east Africa.)

Whipped by quake and making waves to ravage wild,
Impetuous, devastating even child.
Abodes float on torrents rising from below,
Chorus cries of anguish vanish in billow.

Land-Lord, you saw it all going down the slope…
Plenty horses send in rainbow garb for hope!

This poem won a prestigious award in the United States.

I AM Always Here For You!

The North wind slaps my naked face
Cold needles creep beneath my skin
Boreas vows to thwart my grace.

Derailed, I pray… What Shall I do?
A silent whisper comes within
“I AM always here for you”!

Boreas
In Greek mythology, the personification of the north wind. He carried off the beautiful Oreithyia, a daughter of Erechtheus, king of Athens; they lived in Thrace as king and queen of the winds and had two sons, Calais and Zetes. To show his friendliness for the Athenians, Boreas wrecked the fleet of the Persian king Xerxes off the promontory of Sepias in Thessaly; in return the Athenians built him a sanctuary or altar near the Ilissus and held a festival (Boreasmos) in his honour. In works of art Boreas was represented as bearded, powerful, draped against cold, and winged.
Copyright 1994-1999 Encyclopædia Britannica

We are the surviving seeds
Of the Sower,
Escaped and unharmed,
Tossed and shaken,
Shaped and chiselled
By the wild wind.
Sprouting to eternity!

Best Wishes
(To my closest friend,
Barry Bourne - Southampton UK.
A Pastor and a Gentleman.)


I wish I lived in paradise
Where angels shout for joy.
I wish I roamed the galaxies
Beyond my spaceship toy.
I wish I hopped the midnight stars
To Mars and Saturn clime.
I wish I rode the Milky Way
To earth return in time.

I wish I walked in pain-free paths
Rejoicing in my heart.
I wish I lived in blissfulness
With many smiles to part.
I wish a world adorned with peace
Where child will never die.
I wish unchained humanity
Utopia pray for aye.

I wish volcanoes spewed out milk
To calm the churning sea.
I wish storm clouds dripping honey
For land to flow so free.
I wish seaquakes brought good tidings
To surf to shore on wind.
I wish swords turned into crosses
And mankind never sinned.

I wish Best Wishes constant came
To finish my hard race.
I wish to sing and dance all day
Before the Throne of Grace.
When I shed my earthly garment
My wishes will come true!
I will fly in newest heavens
Where God awaits you too!

Best Wishes is a memorial to my friend the late Barry Bourne. Barry inspired me to write this poem, whenever he corresponded with me he ended his messages with Best Wishes. His last words to me were Best Wishes. In this poem I share my thoughts with Barry and I detail my best wishes to him which were also his best wishes.
Posted by Patrick Sammut at 9:23 PM No comments:

Therese Pace - A poet from Malta

I got to know Therese Pace through my involvement in the Maltese Poets Association. She is an active member of the Association and writes in three languages: Maltese, English and Italian. Therese Pace is amongst some of the best contemporary women poets in Malta.

Mother of three Therese Pace was born in Rabat, Malta. She has published an anthology in Maltese entitled ARPEĠĠI (ISBN 99932-0-246-0), for which she was awarded first prize by the National Book Council. Other poems can be found in anthologies in various languages, in newsletters and newspapers. Award winning poet in various contests in Malta and in Italy. She is an active member of the Maltese Poets Association and a member of the World Poets Society. She took part in a literary project in conjunction with the Maltese Poets Association and the European Union celebrating its 50th year of existence. She is currently working on a couple of new projects.

The following are some of her poems in English:

There dwells a touch of magic, an all important air
around the way it happens. The resting of an eye
upon your countenance in an endearing manner; the
faintest smile bestowed whose radiance says it all

before it is rewound into its own self consciousness
as curling leaf that withers on the stem, short stoppages
in time as of a video pausing, transcending, presiding
over senses with aplomb. Short intimacy that secretive

enthrals, enfolding you in butterflies of warmth.
Powder like, it settles on your spirit with translucent
affability, as of some invisible hand reaching beyond
the barriers to touch you in quick flirt, eloquent

in its silence. You marvel at this moment imploding
your whole being, As you wallow lingeringly in its
fleeting splendour, you will become aware of your
astounding luck in having intercepted it.

These shoes are not your type. The kind that give you
blisters from bad choice, no matter how you wax and tax
them for quick comfort. When you put them on you limp
and falter, strutting like the ugly duckling of fairy tale fame,
making them creak a vociferous protest like door hinges,
an all time declared misfit they shake off on the way.

The other kind are kind. Incumbent time moulds them for
the format of your toes, with stress pads to buffer against
potholes or sore spots. With perseverance they conform
resigning themselves to a life of slavery. When they settle
down they fit you like your skin. Laces tied in place show
total disposition, obedience to your feet portrays your
imposition. You walk them, they oblige, adapting.

Fully fledged, they ogle environs, testing, until it’s time to
soar, redeemed from the old confined spaces, growing well
versed projections towards newer heights, new embraces.
Only now, almost too late, do I realize the sky is their limit.

My disciplined shoes have grown fit for posh places.


TO CATCH THE STARS

Enchantment blends me with the chic surroundings. I
do the catwalk stunt on the red carpet Naomi Campbell
style, all poised to catch the stars for just one night.

Chiffon Cinderella gown rustles like plastic in the wind
as hanging mirrors reflect another me, tilting me sideways
to imbalance. Soft light dispenses with the shadows, steals

the mystery from my face. None of the exotic birds hanging
on the Gobelin tapestries show me any slight recognisance.
I can almost hear them twit their disapproval of cheap eau de

toilette as my bare back walks tall. Inside, the crowd breaks
the ice in shimmering parures that thin the average pocket.
I remind me of a fish out of the water, as mind slips back to the

sleek limo that brought me here enraptured in its voluptuous
belly. My body glistened on its panel . They must have licked
like mad to eke such torso glimmer. Like this Louis Quatorze.

I could cross my legs forever in relax on this armchair, kissing
Zwarowski crystal rims that quench vinotheque thirst. Usually
I scoff at silver service manners. Today I simply relish. Slightly

giddy from the Kleine Zalze Chardonnay and the fine prince
beside me, paté de fois de gibier tastes like Paradise lost and
found.. He swirls me round in a Viennese Waltz too rapid for

my tipsiness. I sway towards his midriff pretending to forget
flirting in public is an etiquette crime. When midnight strikes,
I will not drop a silver shoe behind me. Instead I’ll pluck a rose

from the arrangement left idle to observe, and pin it to my hair.
I’ve reason to believe its haunting tell tale scent will guide his
ferret nostrils directly to chez moi still enchanté tomorrow .

We should employ a think tank to protect us
to reassess ambitions at their birth
that clawing at our skin with pointed talons
might rock the sound foundations of our girth.

We hover on the edge of their discretion
and feed upon the fragments that they drop
we may or may not have a say to topple
the scales to our advantage reaping crop.

They are a scheme whereby we shape existence
into a landscape of bubble gum and strass
their platelets dyed vermilion with enticement
our antibodies weaken in the fuss.

We stand exposed and vulnerable to currents
that try to force our wildest dreams to crack
as seeds upon the wind we are transported
to corners that allow no turning back.

Wild dreams are like the tide: its flow momentum
raises the levels higher than the norm
and in its outward ebb discards carcasses
displaying ugly lesions of the storm.

We pin our hopes according to perceptions
at times ignoring signals when they bleep
do not trust dreams, they are our worst allies
they buoy us then destroy us in one sweep.
Posted by Patrick Sammut at 7:27 PM No comments:

Another poetry evening by MPA at Floriana 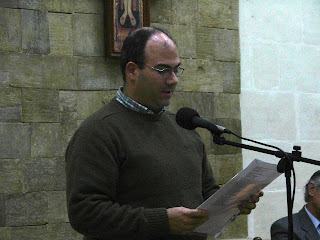 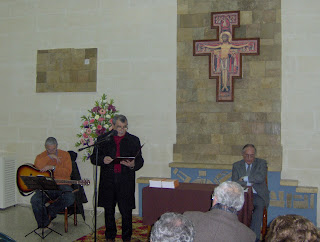 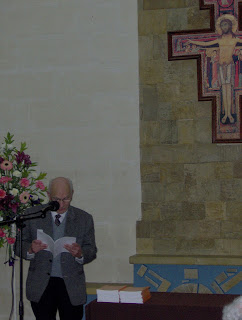 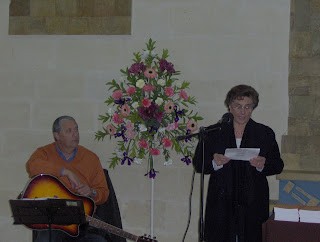 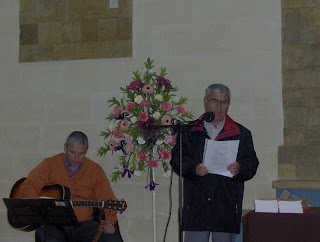 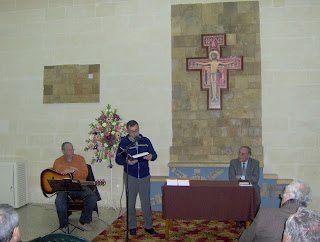 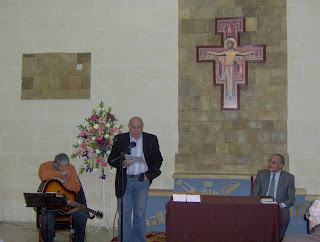 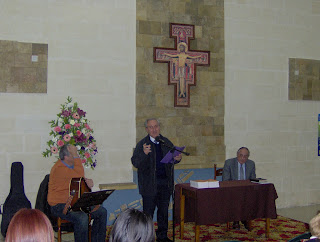 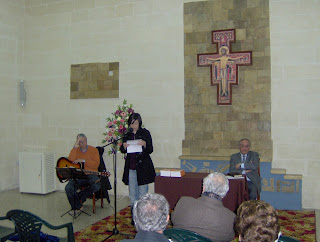 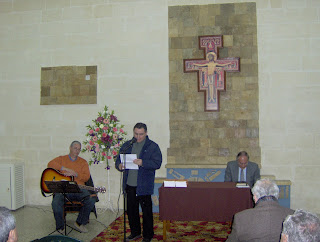 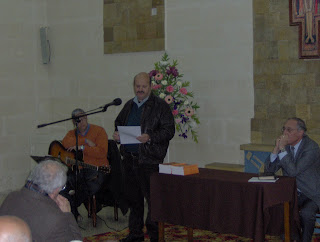 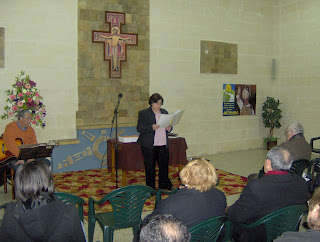 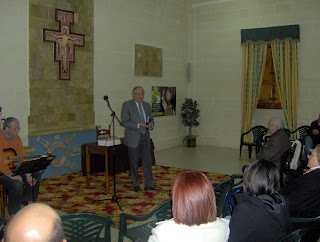 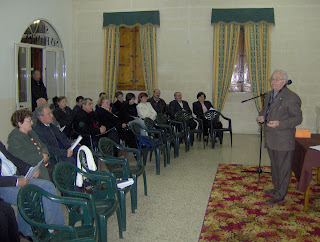 Last Friday 28th March the Maltese Poets Association organized a Poetry Evening at the Centre for Frangiscan Culture at 7 p.m., in Floriana, Malta. Secretary, Charles Magro, presented the evening and included poetry crit during intervals. President, Alfred Massa, made the introductory discourse and asked if some day in the future here in Malta there would be organized a National Conference regarding Religious Poetry in Malta. Members and people interested actively participated during the Evening by reading poetry in Maltese, English and Italian. Poets who read their poetry were Alfred Massa, Charles Magro, Emmanuel Attard Cassar, Therese Pace, Raymond Grech, Leanne Ellul, Rina Camilleri, Lino Grech, Joseph Bonnici, Frans Borg, Joe Abela, Salvu Sammut, John Mallia and me.
I also read a short study about Saint Francis in Dante Alighieri's Divine Commedy. Folk singer and guitarist Walter Micallef sang some of his best songs at intervals.
The Group of Fangiscan Families offered a small reception after the Evening.
Posted by Patrick Sammut at 11:23 AM No comments: