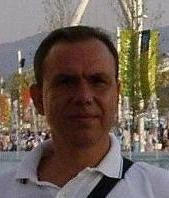 A few days ago I read some poetry in translation written by Greek poet Nickos M. Batsikanis. I even managed to jot down some notes which I will develop in a short study later on.

From here I want to say hello to all my Greek friends and poets, and also to all the poets I know from different countries. Wish you health, peace and INSPIRATION for the summer season!

He was born in Pelasgia Phthiotitha’s. He made a carrier, as officer, in the Greek War - Air force. He lives in Athens and in the village where he was born.
He deals with research concerning the Modern Greek Language, with an approval from the Academy of Athens. He was announced honourable President of the Literary Association “Xasteron”, and he’s responsible for Public Relationships concerning the literary magazine “KELAINO”. He has been enclosed in the “People of the Year”, 2004, for his contribution to Civilization and Humanity, among: George Papandreou (minister), Dora Bakogianni (minister, mayor of Athens), and Minos Kyriakou (president of Greek Olympic Organization).
He has published 7 seven books (5 books of Poetry, 1 story, 1 essay).
He has been honoured with an A΄ Pan-Hellenic Poetry Prize and an A΄ Prize from the International Competition of Poetry. Also, a historical treatise of his gained the A΄ Prize equally with the Professor of History at the University of Cyprus. He was the basic speaker during the literary dedication made by the “International Clubs of Maria Callas”, a true speaker to the great Diva of the Opera. He was a basic speaker at the Word Olympiad “In Greece 2004” throughout the country, and a narrative speaker at the dedication ceremony for the 80 years of the Greek singer Grigoris Bithikotsis, the most popular Greek singer. He also was a special co-ordinator at the International Symposium of Religious Poetry in Greece, and a member to it. He has presented many writers’ and poets’ books, among them: 1) “From my diary”: author Anna’s Grigori Bithikotsi. 2) The c.d. “Behold the Groom is coming”… belonging to the Professor of Byzantine Music, Mr. Sotiris Doganis. He has participated in many festivities for great names of the Arts like: Odysseus Elytis (Nobel), Giannis Ritsos, Federico Garcia Lorca, Georgios Seferis (Nobel), Dionysius Solomos (Greek national poet) and other creators, while it’s been reported that his voice comes primitive and original from the past and especially the Byzantine Period. He writes articles in magazines and newspapers concerning Essays and Treatises. His work has been concluded in Anthologies and “pages” of Internet, while much of his work has been translated into different languages and has been published in many magazines.

What was left from last summer…?
Just a shell!… just a shell!…
rolling around… lost… in a drawer…

The ticket is expensive, to travel in dream.
The seats are a few…

The price is heavy for a few drops of happiness...
Where (why) can you be pushed now?...

Please, don’t push!
Everyone in order...
Hey you! Be careful! You’re stepping me!…
It’s the downwalk to Hades…
Slowly… We’re not in a rush…
Isn’t humanity going there anyway else?...

GREECE -LAND OF THE LIGHT

In my Land’s gardens and orchards are Easter’s fragrances
in the petty - dresses of Spring as April rises high.
With the carnations of the Sun blooming early in the morning
the labourer - poet starts to catch up with values before they multiply.
The light of Delphi has become expensive in our days. Ideals are lost.
The Hot Gates* have dried out.. “Come and get it!” and “No!” don’t exist...
They don’t spring like a fountain from within us.
But some people here baptized in the words of Makrygiannis*
have additional reasons to fight in a more manly way for the most beautiful Language
the Metre, the Rhythm.
We have Mother Mary of Saints a leader and guide to us
because it’s very heavy to consider yourself a Greek person
the price is truly very heavy for you.

John Makrygiannis (1797-1864).
A General of the Greek Revolution in 1821 (War with Turkish). He wrote his memoirs, and his admonitions to Greek, in strong popular language.

Posted by Patrick Sammut at 8:28 PM No comments: