The poetry of Kristaq Shabani from Albania, as seen from an outsider

More than a year ago my fellow poet and teacher Kristaq Shabani from Gjirokaster, Albania, has sent me some of his poems collected in three of his poetry books: Humiliated Virtue, Chrysanthemum (Yellow-white Chrysanthemum), and Eol, I Pray Poems. I must admit that I found it very difficult to put things together after the first reading, primarily because I read Shabani’s poems not in the original but in the English translation versions. This is one of the reasons why I used the word “outsider” in the title of this essay: “outsider” in the sense that the English translations of Shabani’s poetry are kilometers away from the original meaning and beauty which the poet originally had in mind (the idea of the “traduttore traditore”). The second reason why I used the word “outsider” is the fact that I am not familiar with the history, culture and spirit of Albania and its people. These two facts acted as a deterrent at the beginning and I was very skeptical about writing this essay.

However, I wanted to persevere and read Shabani’s poetry more than once and concentrate on the parts which I could understand as a regular reader of contemporary poetry from all over the world. Poetry is that which generates in the reader’s mind numerous questions and reflections. Shabani’s verse managed to do this, and that’s why my essay here shall be posing many questions.

The poet, his nation and mankind

Kristaq Shabani’s love towards his native town is expressed at the beginning of his collection Humiliated Virtue, in his poem Magical Stony Town. Here Gjirokastra is humanized (“grey-haired”, “face”, “body”, “bloody veins”, “breathing”, “head”, “pain” and “fleshy hands”). However, Gjirokastra is also described as a “jeweled town”, “the first flower”, “philosopher town’, “a stony rose” and “labyrinth town”. Shabani insists on the one hand on the “stone” characteristics, and on the other on its human aspects. Thus Gjirokastra is a town of stone but made of human beings.

In Of Queen Sesile Shabani writes that everyone dances in Paris, in Rome and in Madrid, but exclaims that, “(Really, what is happening in TIRANA!)/ Acts are losing their order.” This idea of lack of order is felt in Shabani’s collection Eol, I Pray Poems, in Liking, where he writes: “The pompous person stands with his head cut./ (he likes his head cut)/ Attracts more attention,/ Than with the head on its place”.

Many poems of Shabani deal with power and suppression of the weaker: thus the relation between the dog and the master, the prostitute and the customer, the bull and the gladiator, gods and man, is a regular presence in his poems. In The Writer the reader asks if the poem deals with the loss of identity and thus the humiliation not only at the individual level, but also at the national level. In such a situation Man tries to look for an answer from the Entity (God?) but to no avail, as “The Entity is silent with an unprecedented muteness.”

Shabani writes about the Prophet (maybe the Writer himself as the one having the power of seeing what others do not see?) and the Ape (perhaps a symbol of an uncivilized society?). Is this the reason why Shabani feels humiliated? This can be linked to “The thick-skinned man… the harsh one…” (the one who manages to survive in an Ape world?) in Trap. Man is given animal characteristics, while animals are given human characteristics in Shabani’s poetry. In The Story of the One who Committed Suicide the poet writes about friendship, or the lack of it, in our society. At times animals behave in a more humane way than humans themselves (“The eyes of tears/ From my dog”).

The Affliction of the Gods is a powerful piece. The words “pain” and “tears” are recurrent. Life is understood to be a bitter comedy where again “The Gods are wounded badly”, and where tears, pain and death accompany mankind to its final fall. There is a political (in the wide sense of the meaning) undercurrent in such poems. That of mankind today, as in the past days, is still a “shocking situation”, a situation where blood, pain and conflict rule (White Slavery). That’s why gods are still afflicted. In Wom… Shabani writes, “It’s very odd with what is happening today…/ “Man to break like a window and glass!”. Mankind remains always vulnerable. Shabani looks at all this either from the outside as an objective observer, or from the inside as an active participant.

Pain and disillusion are strongly present in Chrysanthemum (Yellow-white Chrysanthemum) – Paradoxes hajk and epigram, and this through words like “poison”, “torture”, “devilishly”, “elegies”, “blackens”, “ravine”, “dead body”, “smoke”, “blind labyrinth”, “catastrophe”, “cracks”, “suffered”, “tears”, “black-grey coffin”, and “abandonment”. Disillusion is also present in the collection Eol, I Pray Poems, especially in Ex Flower: “Nina, opens the feminine heart/ With the key of the eye…/ the room seems to be empty/ vase left without flowers/ Or with withered flowers!/ Midnight becomes a widow/ while being mocked by the knife/ which cut veins!”

All this has to do with the strong moral dimension of Shabani’s poetry. His poems are concerned with divine justice and mankind. In this matter, the poet has a primary role: in a way he is the voice of the gods, a voice which comes from the distant past but knows what the present is all about. In The Sign Shabani insists on the theme discussed in his first poem, that is, virtue today.

The Vicars is another “political” poem. Rulers come and go, but they are always made up of the same elements. “Thrones’ and “masks’ go together, and the race for power has no place for sincerity. Shabani frequently places side by side the words “play” and “throne”. In this sense power is also a question of being the best player in the game (Polydoras Versus Mourf). Many befriend hypocrisy just to embrace fame. However, for the poet such behavior is comical as he prefers to wander “the beautiful pastures and fields” (Conservatives). This links with what Shabani writes in another of his poems: ours is a society based on superficiality and artificiality. This contrasts the world of the poet, one of authentic beauty: “Beauty alone frees all the Poets”.

As a poet, in general Kristaq Shabani opts for concision. A great part of his verses are hermetic: the symbolic is placed in the foreground while the literal is found in the background. In his poems there are many direct and indirect references to legends, myths and the world of tales. One reads about the “tree of mysteries”, the gladiator and the bull, the shining “white teeth”, and the “magic bag of coins”.

In Eol, I Pray Poems, based on the hajku three-line structure, Shabani starts from things that are tangible and which we experience daily (“cigarette”, “flower”, “bridge”, “chimney”, “wave”), but the destination is much more detached from all that which is real and touches the philosophical, the intellectual and the spiritual.

“Eyelids” are frequently mentioned in Shabani’s poems: many times they represent something much larger such as dawn or the birth of light through sunrise, “The dawn cannot open the eyelids, the extinguished dawn”.

Light is another strong image in Shabani’s poetry. One reads of “the charming eye” (Conservatives), “the magic eye” (Dream), “sparkling rays” and “Two eyes burn” (Of Queen Sesile), “two eyes inflamed”, and “eyes glitter” (Tiraide). The “burning fire” (in Descendant Poets) is not only that which has to do with passion, but also with inspiration. Becoming pregnant may thus also mean becoming inspired. “Birth” and “pregnancy” are also present in Every Book has its Luck. Such concepts are tied to the process of waiting and having patience. Does not this indirectly refer to the relation between the poet and inspiration/poetry? In Dream, Shabani meets Homer who “came out of the statue of the old parliament”. However, this magical moment is short-lived, and what remains is light shining brightly.

Reading Kristaq Shabani’s poems is not easy, primarily because the translation in English creates a solid distance from the original in Albanian. Reading Shabani’s poetry from the outside made me feel like trying “to find a needle in the Labyrinth” (The Rostere Prize). However, the persevering reader understands that Shabani’s poetry is an invitation to search in “the depths of the soul”, and the satisfaction is huge when s/he starts to put together the different pieces to form the final meanings.

Kristaq Shabani manages to “open columns of silence” through his pencil/verses in order to provoke the reader to react. It is a silence which is heavy with a sense of awe and thought-provoking. Real poetry manages to surpass the limits posed by languages and translation, thus reaching directly the heart of the reader. And this is what Kristaq Shabani’s poetry manages to do, thus surpassing the individual and national limits and reaching the universal.

Posted by Patrick Sammut at 7:01 PM No comments:

An interview with translator Elvana Zaimi from Albania 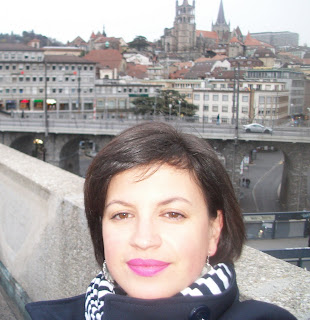