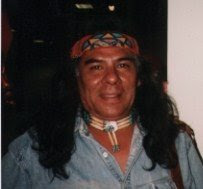 Teresinka Pereira has just sent an e-mail informing us about the death of a poet from USA, Eddie Two Rivers, last 27th December, 2008, after a long battle with cancer.

He was a talented poet, playwright and performer, and worked to obtain equal rights and justice for Native Americans. He was also dedicated to a number of causes such as AIDS, battered women, environmental issues, the death penalty, gang violence, hunger, homelessness and world peace.

Eddie Two Rivers was born in 1945 in a small town in northwestern Ontario and father of many children. He was an Anishanobae from the Ojibwa tribe. As a profession he was a journeyman machinist, but then he started writing fulltime. Among his published poetry collections, A Dozen Cold Ones. He taught theatre at Truman College where he was Founding Artistic Director of Red Path Theater Company. He also worked in sales, construction, acting, and as a performance artist, a community organizer and union representative.

His book Survivor's Medicine published by the University of Oklahoma Press in October 1998 won the 1999 AMERICAN BOOK AWARD given by the BEFORE COLUMBUS FOUNDATION. He addressed audiences at many of Chicago's most prestigious cultural and literary institutions and events.

Listen to Eddie Two Rivers performing one of his war poems - really gripping:
http://www.youtube.com/watch?v=GX_ogg7r0fQ
A poem of his:
August 17, 2008
Wannabe Warrior
Oh, the regrets
some people carry around
in their back pockets
like small boys tote stones,
throwing them
here and there
like temper tantrums.
You talk to people
like they were supposed to care.
You invent a past to compensate
for what you wanted but never could be
Valor in battle?
A fairy tale you keep
up your sleeve
like a switch blade knife,
a story tucked away
between shots
and cheap draught beer.
Pow Wows, Fat Cats, and Other Indian Tales. Mammoth Publications and Woodley Memorial Press. Copyright 2003 the author.
from http://www.chicagopoem.typepad.com/
The following is a poem dedicated to Eddie Two Rivers written by Jose Bono Rovirosa:
To E. Two Rivers
Spirit of the Lake
I beseech your forgiveness
for I broke your harmony
on a night of full moon
when some poets screamed at you
disrupting the nature of your spirit.
I am here to make peace
with your spirit
for I do not wish
to live my life with anger
by the Spirit of the Lake
who lives within me
and all things alike.
Good Spirit of the Lake
I am here today
to offer my sacrifice
to you and the four winds
riders of nature
sharing my respect and love
my spirit has with yours.
I offer you these red roses (throw the roses into the lake)
as a sign of beauty
death and life
is to me,
and these ashes (burn the poem and spread the ashes in the lake)
basic material
of the universe.
Jose Bono Rovirosa
Seosan-SI, S, Korea12/29/08
Posted by Patrick Sammut at 6:05 PM No comments:

Toni Piccini - a poet-painter from Trieste

I must admit that having a blog has its many advantages. It is like a shopwindow looking towards an open world where people from all corners of the globe pass and look at it. Sometimes somebody dares to enter the shop and talk with the owner, that is, me. And the interesting thing is that the shopowner is all the time getting to know different people and learning new things.
My last meeting was with a poet-painter from North Italy, Trieste, Toni Piccini. He wrote me an e-mail telling me that he saw my blog and Teresinka Pereira's poem about the children in Gaza. Toni Piccini politely asked me if I would be glad to publish some of his work on this blog. I saw his works and I think that they are beautiful: they are a mixture of colour, emotion, philosophy and motion. 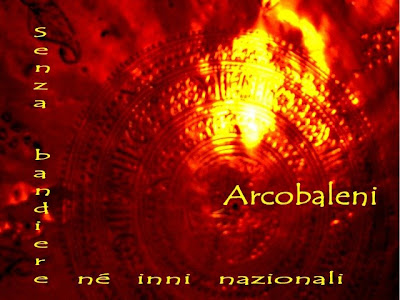 His has a passion for both writing and music. Piccini has conducted radio programmes for these last thirty years and has taught the subject too. He has written a story about Jim Morrison (1984) and musical criticism articles on different publications (both hard copy and virtual). He then starts writing poetry in Italian and in dialect. Some years ago he starts writing haiku, his favourite medium of expression, together with other artistic forms of expression. In 2005 he read his verse at the XI International Festival of Poetry of Genoa, and in Urbino (14 haiku for Patti Smith) as part of the evening dedicated to Patti Smith named "70's
Flowers".

Toni Piccini has a very nice and interesting website, together with a blog: 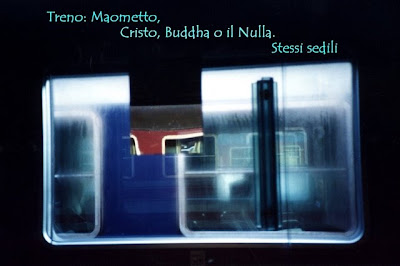 In the train: Mohammed,
Christ, Buddha or the Nothing -
same seats

Without hymns
or national flags -
rainbows


Dear Toni Piccini, a big THANKS for your artistic creations.
Posted by Patrick Sammut at 8:23 AM No comments: